The Ivanhoe Game: a Practicum Project by the 2013-14 Praxis Fellows

The Praxis Program is a year-long fellowship which trains six humanities graduate students in conceiving, planning, developing, designing, and marketing a digital project. Scholars' Lab faculty and staff guide the students through the entire process, giving lessons in coding, digital collaboration, project management, and a myriad of other skills necessary to building a DH tool. 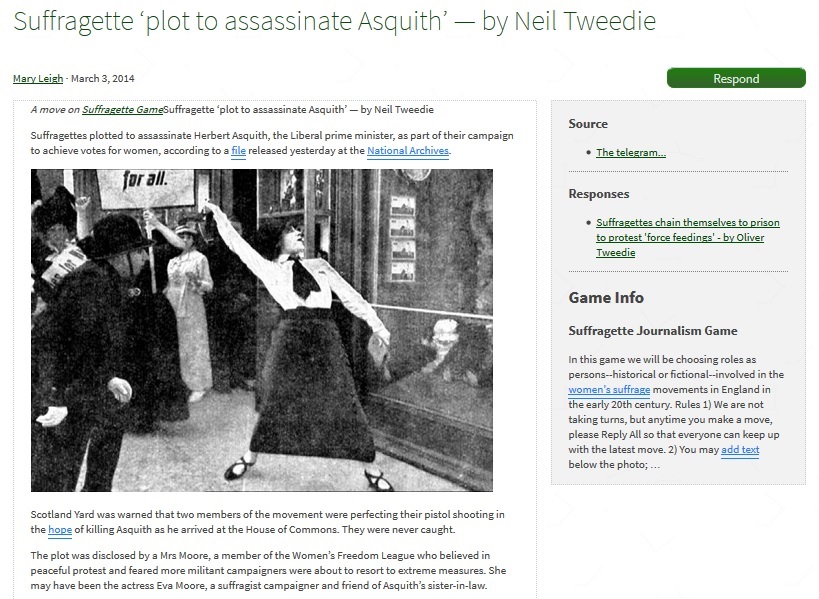 A move in the Ivanhoe Game WordPress Theme

The Ivanhoe Game was originally conceived by Johanna Drucker and Jerome McGann in the early 2000s, then developed in the UVa SpecLab by Bethany Nowviskie and others. Our Praxis cohort decided to bring Ivanhoe back as a WordPress Theme. The Ivanhoe Game is a space in which players make interventions or commentary on a text or cultural object in support of a particular roles, or theoretical stances, which they assume. For more on the history and theoretical underpinnings of Ivanhoe, visit the original info site.

I served as project manager on this team, keeping track of deadlines, checking in with team members' progress, making decisions on the scope of the project, and planning publicity. Along the way, I gained skills in HTML and CSS, learned version control on GitHub, became proficient at using WordPress to publish posts on our team blog, and also got experience working with developers and designers to decide on key features of our tool. I did not directly work on the code of Ivanhoe, but I do understand how it works and the challenges our developers faced in the process. I also spent countless hours with our design team discussing the aesthetic of Ivanhoe. On our informational website, I did not do the CSS myself, but I did organize and enter all the content in HTML. My project managerial education can be traced in the posts I wrote for our team blog. 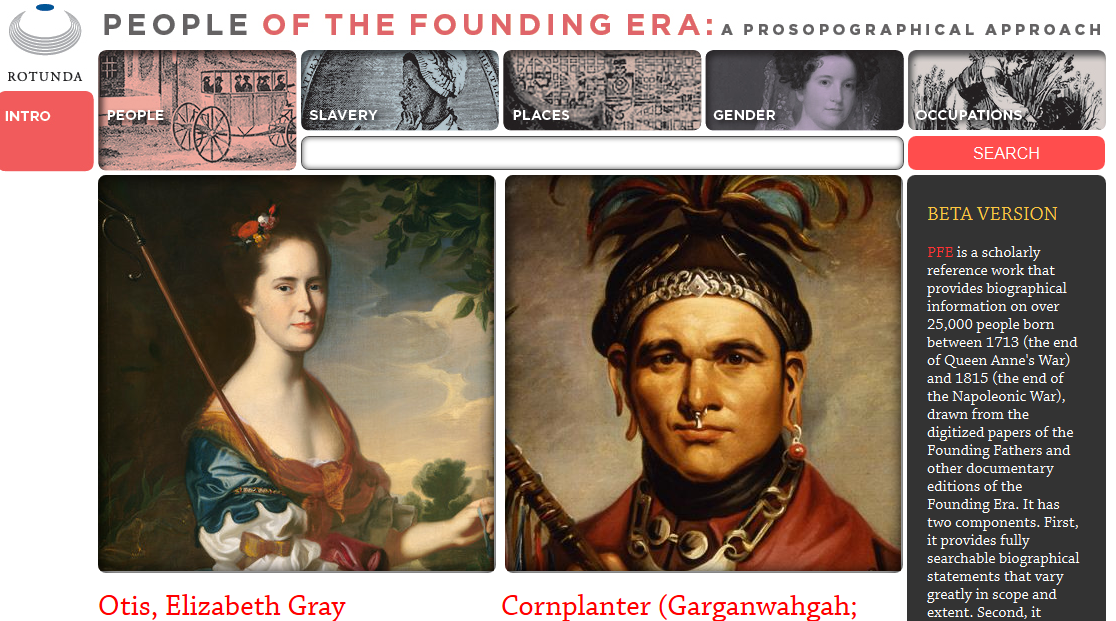 Documents Compass is a part of the digital initiative of the Virginia Foundation for the Humanities. It maintains the Papers of the Founding Fathers Early Access Project, which provides access to digital editions of the documents written and received by the Founding Fathers. The project People of the Founding Era assembles the persons mentioned in the Founding Fathers' papers in a relational database. Each person's record includes biographical details such as birth, death, occupation, military service, educational institutions attended, etc. Persons can be sorted and searched according to these types of information. For instance, a researcher might search for all the female cheesemongers living in Virginia at the time.

As an intern for Documents Compass, I expanded the PFE collection to include enslaved people, professors, professor family members, hotel keepers, and students who lived and worked at the University of Virginia. One significant area of my research was who lived, worked in, or helped to build the different buildings in Thomas Jefferson's Academical Village. This research is especially significant for reconstructing and visualizing slave communities on the university campus. I presented this research with my supervisor, Sue Perdue, and Encyclopedia Virginia editor Brendan Wolfe at the Virginia Universities and Race Histories Conference in November 2013.

Created by University of Virginia professor Alison Booth, Collective Biographies of Women is a digital prosopography (study of biographical networks) which assembles records of women whose lives were chronicled in 19th-century collective biographies. The collection links its subjects by the particular biographies in which they were included. For instance, which women were featured in biographies alongside Queen Victoria? Who appeared in the same biographies as Lola Montez? By asking and answering such questions, the project examines methods of typing women and narrating their lives in the 19th century.

I assisted by editing the person records in the CBW database, which gave me the opportunity to learn about relational databases. I also conducted TEI markup on the biographical texts, another focus of CBW being analyzing the types of narrative elements included in the biographies themselves. For this, I learned how to use Oxygen XML Editor and was introduced to the basics of XML.

For my thesis, I edited the Preface and Chapter 23 of Cooper's 1840 novel Mercedes of Castile, in which Cooper retells Christopher Columbus' discovery of the Americas. I have collated (compared word-for-word) the various English-language editions with each other and with the author's holograph manuscript, held in UVa Special Collections, in order to establish what Cooper's final intentions for his work were and to restore corruptions in the published text.

For my Rare Book School Fellowship, I constructed a digital edition of the portion of Mercedes which I edited. Building on my HTML, CSS, and XML skills, I edited the text using TEI parallel segmentation and constructed a website for the edition. I then learned the basics of XSLT and JavaScript and, with much help from the Scholars' Lab's brilliant and generous Jeremy Boggs, Wayne Graham, and Eric Rochester, used them to display the textual variants in popover windows. The edition won Honorable Mention for the RBS Fellowship Betsy and Stuart Houston Prize for Most Outstanding Project.

Collation of M.R. Delany's Blake, or, The Huts of America 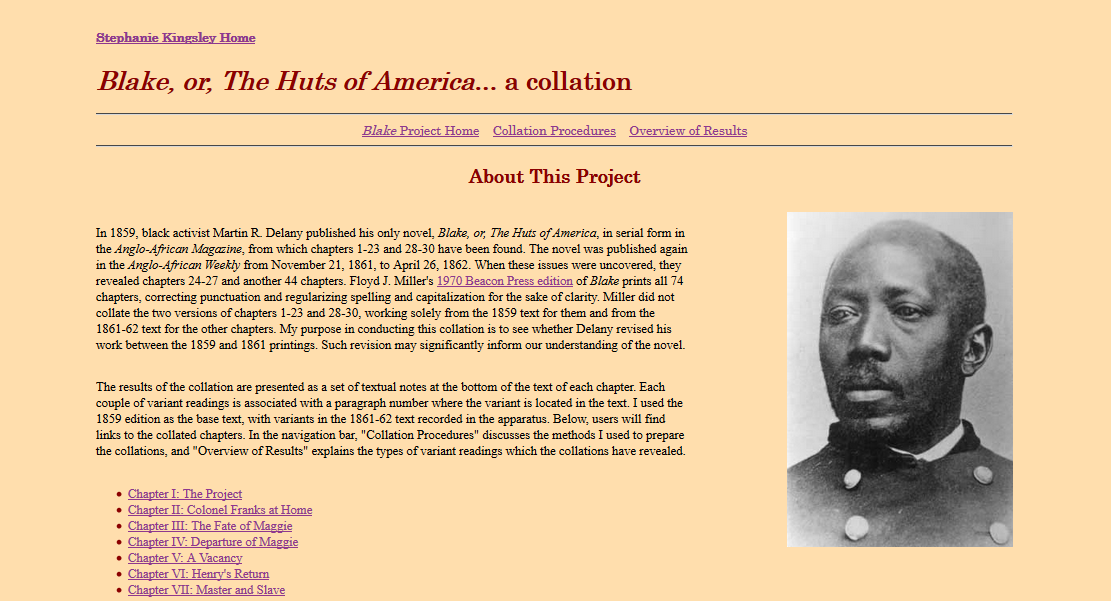 The landing page for my collation

For Jerome McGann's Fall 2013 seminar "American Historiography," I collated two serializations of Martin R. Delany's novel Blake, or The Huts of America, one of the earliest African American novels. The work was published in the United States in 1859, then again in 1861, in serial form by the Anglo-African Magazine. No one had collated the two versions previously, but such a project was vital to determining whether Delany revised his work, a fact which could substantially inform various critical problems of the novel. I took on the project for my seminar project, collating the 1859 and 1861 texts using Juxta collation software, by NINES. I entered the texts using OCR where possible and transcribing by hand otherwise.

A collation in Juxta, the tool I used for the project

I then edited the resulting XML, generated HTML files of the text and apparatus, and organized the results on a website I built for the purpose. This was my first foray into the world of digital editions. I learned a lot in the process about how best to keep track of and present textual data. The time constraints of the semester limited this project to a basic HTML display of variants. I significantly improved on my skills for my next project, a digital edition of a portion of James Fenimore Cooper's Mercedes of Castile (see above).